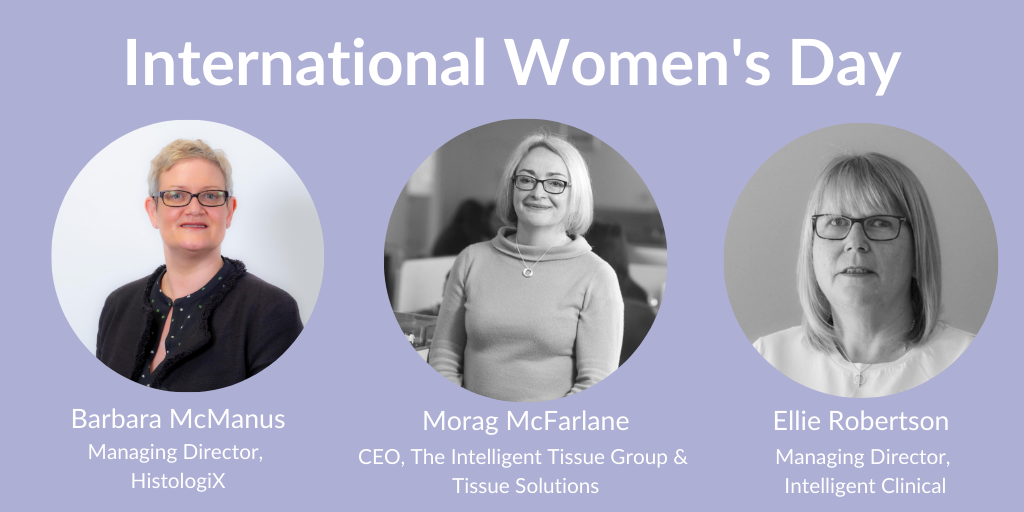 As this International Women’s Day falls in British Science Week, our three female leaders who head up each arm the Intelligent Tissue Group, share their thoughts on their careers and the industry.

Who were your female role models growing up?

Morag: There was no one in particular that inspired me to go into science when I was younger, but my grannies were definitely an inspiration to me. They were really hard workers, and one of them was particularly bright – I really admired that. Later on in life it was the women who were setting up their own companies in the industry. I’d look at them and think ‘I can do that!’

Barbara: My first year high school science teacher, Miss Campbell. She was so enthusiastic about science and was the only female science teacher within the school at the time. Her enthusiasm for the subject was infectious – she inspired me to continue in science and thanks to her, I left school with qualifications in maths, biology, chemistry and physics.

Ellie: Mrs Eileen McPherson, she was a standout school teacher at St. Machans primary school, Lennoxtown. I was just nine and she was the first teacher I had with a really caring and nurturing side – taking the time to understand every person she taught, and encouraging even the slightest glimmer of promise.

What do you love most about your job?

Morag: I love that we’re playing our part in vital research as our services help others develop and test drugs. There’s a really good purpose in what we do, and we play a really important role for various research groups and pharmaceutical companies on a global scale.

Barbara: Learning about new therapeutic products being developed – there are so many clever people out there developing therapeutics for a vast range of diseases. When we are involved in clinical trial support for such therapeutics, it’s great knowing that progress and success are being made and that our work is vital in supporting these advances.

Ellie: During the clinical trial process when I see a new therapy showing positive effects to the point that it might result in a patient having a better quality of life.  For me, improving quality of life and allowing people the breathing space to live better is definitely the end goal in clinical research.

Have you ever experienced any barriers in / prejudices in your career with regards to your gender?

Morag: Definitely. Early on there was nothing of note, but the older I got and the higher up I got in my career, the more prejudice and barriers there were. When I first started going to networking events, it was all men of a certain age, and they just didn’t take me seriously. I also think that there are barriers for women getting on the board of companies, when they get to a certain level. There has been some change in our industry but there is still a long way to go.

Barbara: I have been very fortunate to work alongside colleagues who have always been respectful of females. I think barriers and prejudices can be found in many careers, but I’d say I’m lucky not to have experienced any.

Ellie: Without any hesitation this is sadly easy to answer – yes.  In my early nursing career, it became clear that male nurses were promoted much faster than females and also given favourable day to day tasks by the senior female nurse management.   In later research years, although I never felt personally held back, and for sure I have had many opportunities, my male junior colleagues still progressed more rapidly.  I think the situation within the public sector and nursing has changed since and males and females are on a more equal footing, but within industry there is still work to be done.

What would you say to encourage more girls to take on a career in STEM or research?

Morag: Speak to as many people as you can who work in the industry to learn more about what they do, and the roles available. A lot of young people’s understanding of the job market is what their teachers tell them about, but they often have quite limited knowledge of the private sector, so it’s important to do your own research.

Barbara: Go for it – if science, technology, engineering and mathematics is what you enjoy and excel in, then don’t hold back. You spend a lot of time working and you want to be spending that time doing something you love. You will get so much back from it if you pursue it as a passion.

Ellie: There is a great career path if you want it but be very clear with your goals from the start and make the most of every opportunity.  With so many different career paths in this field it can be easy to go in a direction that may not be the best fit. Learn early on what you enjoy and don’t be steered in a direction that isn’t who you are.  Knowing clearly where you want to go with a STEM career is a great starting point.

What inspired you to stick with science/healthcare?

Morag: I loved all three sciences at school, but I didn’t know what I wanted to do with my education. Thankfully I had really good teachers who recognised that I had potential and highlighted me as ‘one of those who was going to uni’. The rest was just pursuing my education until I figured out that it was applied science that I loved – the science that you can use in real life, to benefit real people, so that’s when I turned to contract research.

Barbara: My enjoyment of it and the continual learning. Every day is a school day in science, so you never get tired of it.

Ellie: The career options of having a nursing qualification really opened a variety of opportunities.  I definitely feel I had choices from that early beginning.  I moved away from nursing over sixteen years ago but I can still say that the foundation of a nursing background has been applied in every aspect of the roles I have moved into to, both in the direct project work and in people management.

What did you want to be when you were younger?

Morag: When I was very young I wanted to be a hairdresser, as I had one of those hairdresser dolls! Then it was a vet, but I didn’t pursue that because of how squeamish I was, which is ironic considering I now source human tissue for a living!

Barbara: A teacher, though I think I just wanted to tell people what to do!

Ellie: The Bionic Woman (Lyndsey Wagner) – I am definitely giving away my age! Funnily enough I moved into anaesthetics and theatre nursing as soon as I qualified as a nurse with a lot of input around prosthetics and orthopaedic surgery, perhaps those initial influences in early childhood stick with us more than we realise!

What’s the best piece of advice you’ve ever been given? – Have you / How have you applied that to your career?

Morag: Do what you enjoy and what you’re good at. Then the rest will figure itself out.

Barbara: That there are so many opportunities and different paths you can follow within STEM subjects and careers. A great piece of advice I was given was that when new opportunities come along, grab them with both hands. Don’t be afraid of the unknown!

Ellie: Someone once told me; ‘When teaching, if someone doesn’t understand what you’re telling them,  it’s not them that is wrong, it’s the way you are teaching it’. Definitely, the whole research environment is about sharing information to learn and progress.   If you don’t teach in a way that people understand or encourage new learning, then you risk never inspiring the next generation.

Register for our donor database and donate samples.